The increase in life expectancy at birth from the previous year was 0.11 years for women and 0.30 years for men.

The expected life expectancy of new-born boys in 2017 was equivalent to that of girls 20 years earlier. The gender gap has been decreasing steadily since 1987. Thirty years ago, the disparity was 6.8 years, while last year it fell to 3.4 years.

Figure 1. Life expectancy at birth for males and females. Norway

Life expectancy is calculated for all ages, and the gender disparity narrows as we move up the age categories. Until the age of 40, the disparity is over 3 years, falling to 2 years at age 70 and less than 1 year at age 85.

Men who reach 100 years of age seem to have at least as good life expectancy as women, but the basis of calculation at this age is so small that these figures are highly uncertain.

Figure 3. Life expectancy at birth for males and females for a selection of countries. 2015

Japanese women traditionally live the longest of all, and by 2015 they reached an expected life expectancy of 87 years, which is 0.2 years more than in 2014. 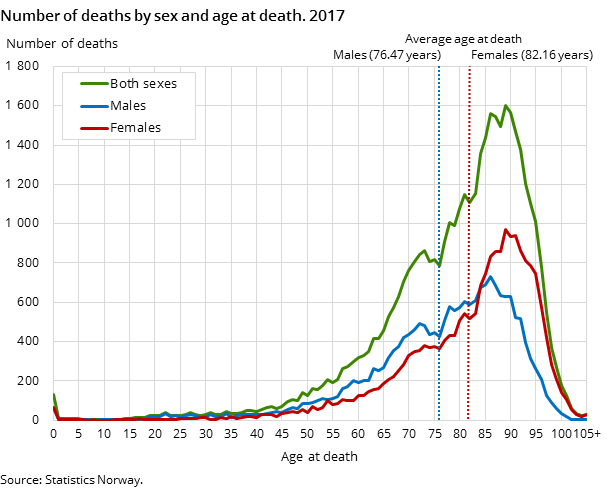