At the beginning of 2017, there were 725 000 immigrants and 159 000 Norwegian-born to immigrant parents in Norway. The highest relative growth in 2016 was among immigrants from Syria.

Immigrants accounted for 13.8 per cent of the total population in Norway as per 1 January 2017, while Norwegian-born to immigrant parents accounted for 3 per cent. These two groups have a background from 221 different countries and independent regions. 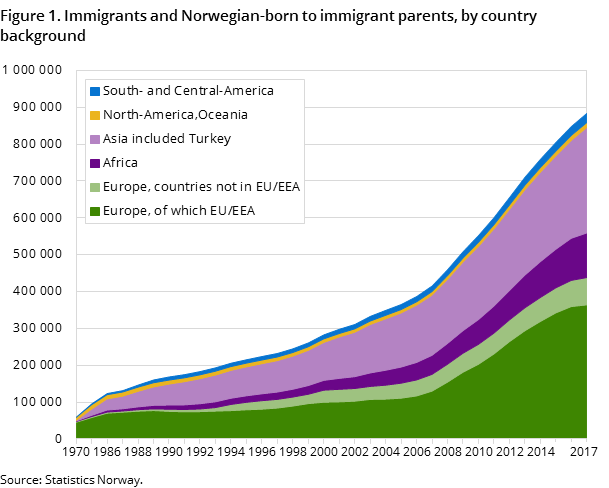 Immigrants from Syria had highest growth

Additionally, 1 500 Norwegian-born to immigrant parents from Syria were registered as resident in the same period.

Persons with an immigrant background from Syria now make up the eleventh largest group in Norway, nearly the same size as the entire population of Steinkjer municipality. 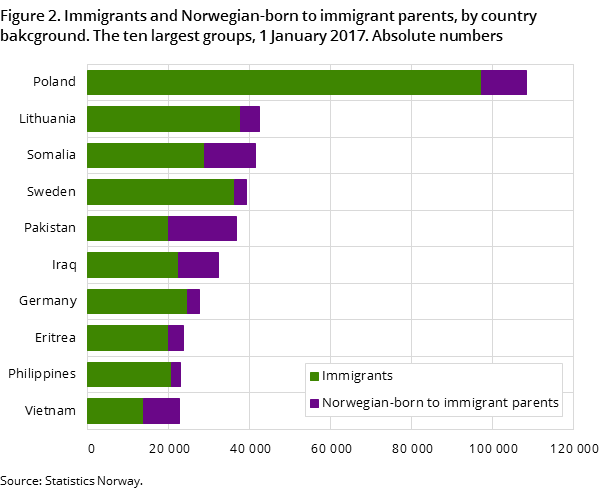 The second largest group of immigrants is made up of Lithuanians, with 37 600 persons. Swedes are in third place with 36 300, followed by Somalians, with 28 700.

Most Norwegian- born to Pakistani, Somali and Polish parents

How many in the so-called third generation?

Persons born in Norway with two Norwegian-born parents and four foreign-born grandparents are not included in Statistics Norway’s definition of population with an immigrant background. This group totalled exactly 1 013 persons as of 1 January 2017. The grandparents of this group most commonly immigrated to Norway in the 1970s, and their parents were born in the 1970s or later. Just 13 persons are aged 18 or older, and 70 per cent of the group are below the age of 6. Over half of the group has a Pakistani background. Other groups include Turkey and Morocco. 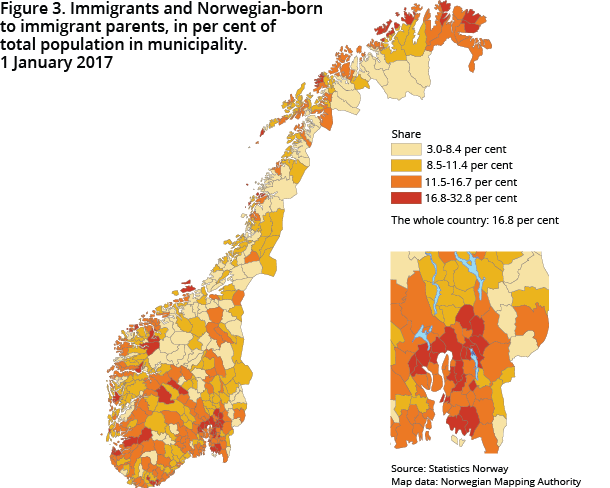 One in three with an immigrant background in Oslo

Oslo had the largest population of immigrants and Norwegian-born to immigrant parents, both in relative terms and absolute figures. Of Oslo’s 666 800 inhabitants, 166 400 were immigrants and 50 900 were Norwegian-born to immigrant parents as per 1 January 2016. These two figures combined constitute 33 per cent of the capital’s entire population. The proportions in Båtsfjord and Drammen were also high, with 29 and 28 per cent respectively.

All suburbs in Oslo were above the national average of 16.8 per cent. The suburbs with the highest proportions of persons with an immigrant background were Stovner, Søndre Nordstrand and Alna, with over 50 per cent.