The population grew by 10 600 people to at total of 5 278 000 on 1 July 2017, according to new figures from the statistics Population and population changes. This is the lowest population growth in the 2nd quarter since the high labour influx started in 2006 following the EU expansion in Eastern Europe. 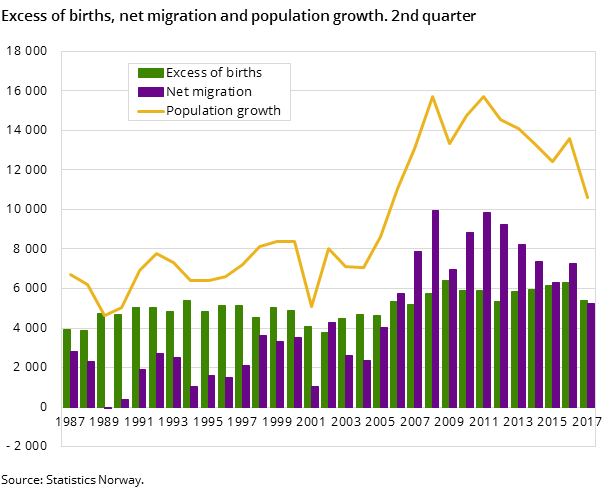 About 12 400 persons were registered as immigrated and 15 100 children were born in the 2nd quarter. At the same time, 7 200 persons emigrated and 9 700 persons died. This resulted in a net migration of 5 200 people and an excess of births of 5 400. The excess of births is the lowest in any 2nd quarter since 2007. Nevertheless, the birth surplus in the last quarter contributed more to population growth than the net immigration. This has not happened in any quarter since the period of high immigration started in 2006. The reason for this is that net immigration dropped much more than the birth surplus.

Four counties had no population growth

Apart from a slight decline or an almost status quo in Oppland, Sogn and Fjordane, Troms and Finnmark, all other counties had a population growth. All counties had net immigration from abroad, but a somewhat higher domestic migration loss led to five counties, including Oslo, having a net migration loss. A large birth surplus in Oslo offset this, and consequently the population of Oslo increased by 240 people. The highest population growth was in Akershus, Rogaland and Østfold with 3 840, 1 020 and 990 more residents in the 2nd quarter. All counties apart from Hedmark and Oppland had birth surpluses.

In the second quarter, 1 940 Norwegian citizens emigrated, while 1 943 immigrated.