251612_not-searchable
/en/bank-og-finansmarked/statistikker/vpstat/kvartal
251612
Increase in share values
statistikk
2016-02-22T10:00:00.000Z
Banking and financial markets
en
vpstat, Securities registered with the Norwegian Central Securities Depository, shares, commercial papers, bonds, equity certificates, dividends, stocks, yield, share value, net transactions, share issues, interest yieldSecurities markets , Banking and financial markets
true
The figures give an overview of which institutional sectors hold and issue the securities that are registered with VPS. The value of quoted shares was NOK 1 827 billion at the end of the 4th quarter of 2015; an increase of 4.3 per cent compared to the end of the previous quarter.

The introduction of a new sector standard has caused the old tables to stop being updated. New tables have been added that include time series from the first quarter of 2012 and onwards.

The market value of quoted shares registered with the Norwegian Central Securities Depository (VPS) increased by NOK 76 billion in the fourth quarter of 2015. This corresponds to an increase of 4.3 per cent. 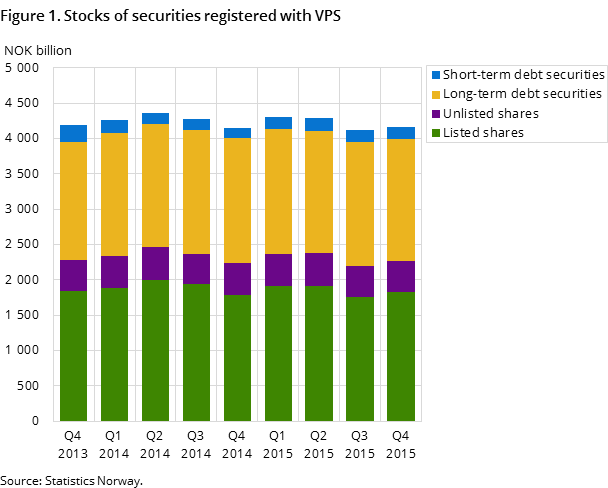 Meanwhile, the value of the unquoted shares registered with the Norwegian Central Securities Depository (VPS) saw a NOK 11 billion decrease this quarter. This corresponds to a 2.4 per cent reduction in the total market value of all unquoted shares. The decrease is principally related to a merger with a quoted company. This led to values being transferred from non-quoted shares to quoted shares.

The central government net bought securities worth NOK 2.9 billion during this quarter. Long-term debt securities made up NOK 1.8 billion of these purchases.

Decrease in the outstanding amounts of long-term debt securities

The statistics is now published as Securities.