During the first quarter of 2017, the net purchases of mutual fund shares registered in Norway amounted to NOK 32.7 billion. In particular, the financial companies are net subscribers, and equity funds were the most popular type of fund in the period.

The share capital of mutual funds managed by Norwegian fund managers increased by NOK 65.9 billion during the first quarter of 2017, and reached a total value of NOK 1112.3 billion at the end of the period. This corresponds to a 6.3 per cent increase during the period. About half of the change in total share capital, NOK 32.7 billion, is due to net purchases in the funds. 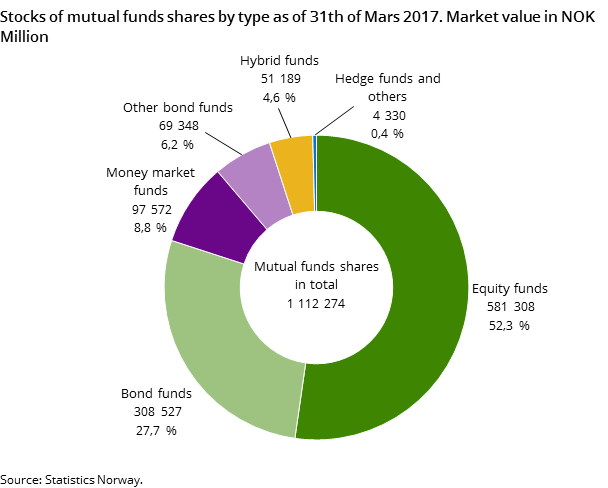 The share capital of equity funds amounted NOK 581.3 billion by the end of the first quarter of 2017, and represents 52.3 per cent of the total market. This is an increase of 3.6 percentage points compared to the first quarter of 2016. Similary, the share capital of bond funds in the same period has decreased 3.5 percentage points, from 31.2 to 27.7 per cent.

Figure 2. Net purchases of shares of equity funds by sector

Life insurance companies and pension funds is the largest holding sector of mutual fund shares, holding shares worth NOK 466.3 billion. Although life insurance companies and pension funds are the largest holding sector, ownership has decreased by 1.9 percentage points in the two last quarters. Households, mutual funds and foreigners are also major shareholders in mutual fund shares, owning 14.6 per cent, 13.9 per cent and 10 per cent respectively.

Figure 3. Owner share in the mutual funds shares capital as of 31th of Mars 2017