Unemployment at 4.3 per cent

Adjusted for seasonal variations, there were 120 000 unemployed persons in February. This corresponded to 4.3 per cent of the labour force, according to new figures for Labour force survey.

From November (average of October-December) 2016 to February (average of January-Mars) 2017, the seasonally-adjusted unemployment decreased by 0.4 percentage points, or 11 000 persons. This change is within the Labour Force Survey (LFS) margin of error. 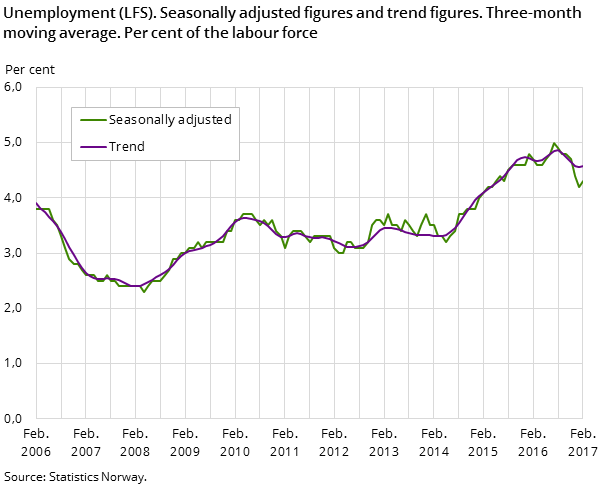 In comparison, the number of people registered as unemployed or on government initiatives to promote employment with the Labour and Welfare Administration (NAV) decreased by 3 000 persons in the same period. This figure is also based on seasonally-adjusted figures and three-month averages.

Small changes in the number of employed persons

According to the LFS, the seasonally adjusted number of employed persons increased by 9 000 persons from November 2016 to February 2017. This change is within the LFS margin of error.

Since the turn of the year 2014/2015, there have only been small changes in the number of employed persons, but in the same period the population aged 15–74 years has increased. Therefore the employment rate has decreased, from 68.5 per cent in January 2015 to 66.9 per cent in February 2017.

Figure 4. Seasonally adjusted unemployment in selected countries. Per cent of the labour force