Still a surplus in the balance of goods and services

The balance of goods for the first three quarters this year amounts to NOK 105 billion, which is almost twice as much compared to the same period last year, according to new figures from the statistics Balance of payments. During the same period, the balance of services has been negative for the last two years, amounting to NOK 59 billion in 2017 and NOK 62 billion in 2017. In fact the imports of services have exceeded the exports of services every year since 2009.

The total import value of goods and services in the third quarter ended at NOK 271 billion. This is approximately the same as last quarter, but NOK 7 billion more compared to the same quarter last year. The preliminary figures of exports and imports in the third quarter are more reliable for goods than for services. For more information about exports and imports, including price and volume considerations and seasonal adjustments, please see the quarterly national accounts.

The current account balance, which is the sum of the balance of goods and services and the balance of income and current transfers, ended at NOK 18 billion this quarter. This is NOK 37 billion less compared to the previous quarter.

Other investments increased by NOK 47 billion on the asset side, mainly driven by Norwegian banks’ increased deposits abroad and the Government Pension Fund Global’s (GPFG) loans abroad. The GPFG was also central to the change in portfolio investments abroad, with a substantial rise in equity abroad coupled with a smaller reduction in debt securities. The total increase in portfolio investments amounted to NOK 18 billion. Foreign direct investments abroad were reduced by NOK 46 billion. All in all, this gave a moderate increase on the asset side. 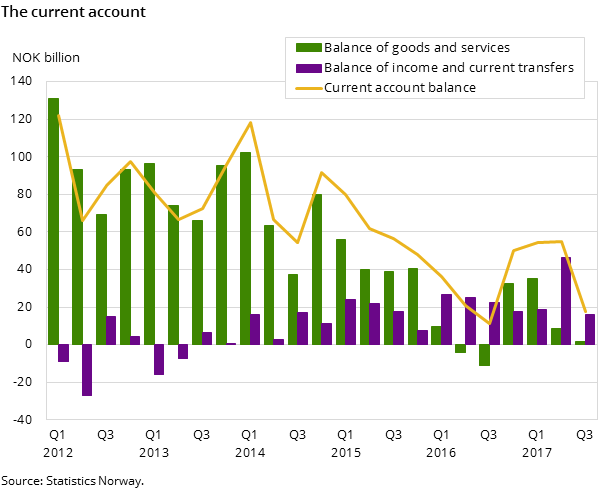 Income and current transfers have also been revised for the first two quarters of 2017. The biggest revisions are due to new calculations of reinvested earnings, but there have also been revisions of investment income. In total, the balance of income and current transfers has been revised up NOK 2 billion for the first quarter and NOK 3 billion for the second quarter.

For the financial account, revisions have been made dating back to the first quarter of 2016.