As from 2017 the statistics is published with Credit indicator.

The main focus of the credit indicator C3 is the twelve-month growth in the general public’s total debt. Transaction and growth estimations are adjusted for changes in stocks that are not due to new borrowings or repayments of loans.

The public's external loan debt is the total of all foreign short-term and long-term loan debt at the end of the month. This debt is made up of money market instruments, bonds and notes, deposits and other debt. Long-term debt is defined as debt outstanding for more than one year.

Oil activities comprise all enterprises in industry 11 Extraction of Crude Petroleum and Natural Gas, and Ocean transport comprises all enterprises classified in 61.101 Ocean Transport according to the Standard Industrial Classification.

Borrowing sector: the C2 data is classified according to the borrowing sector’s municipalities, non-financial corporations and households.

Only at national level

No mandatory reporting, but data are posted on Statistics Norway’s website under "Economic Indicators".

The original data and the revised micro data are stored in accordance with Statistic Norway's standard for file storage (DataDok).

C2 is an approximate measure of the magnitude of the gross domestic debt of the public (households, non-financial enterprises and municipalities) in NOK and foreign currency, while C3 gives an indication of the total gross debt, i.e. the sum of the public’s gross domestic and gross external debt.

The purpose is to contribute to the basis of information for the monetary policy. The statistics provide an overview of the development of credit at an early stage and are an important indicator of economic activity.

Monetary authorities, i.e. Norges Bank and the Ministry of Finance. Other important users are the Financial Supervisory Authority of Norway, the financial markets and research institutions. These statistics attract a great deal of media attention.

No external users have access to the statistics and analyses before they are published and accessible simultaneously for all users on ssb.no at 8 am. Prior to this, a minimum of three months' advance notice is given in the Statistics Release Calendar. For more information, see Principles for equal treatment of users in releasing statistics and analyses.

The statistics are based on the guidelines in the System of National Accounts (SNA 1993), European System of Accounts (ESA 1995), Manual on Monetary and Financial Statistics (IMF) and Balance of Payments Manual (IMF 1993).

The figures for the Public's External Loan Debt and The Gross External Debt Position are identical on a quarterly basis (i.e. figures for the various quarters in a year) for the relevant institutional sectors.

Derived statistics, without direct Council Directives or Council Regulations from the EU.

Sources included in C2 are loans in NOK and foreign currency to the public by banks, state lending institutions, finance companies, life and non-life insurance companies, mortgage companies, private and municipal pension funds, the Norwegian Public Service Pension Fund and Norges Bank. C2 also includes the public's bond loan debt to domestic lenders and the public's certificate debt in the domestic market. The public's debt, in the form of secured and non-secured domestic inter-company loans, is included up to the end of December 1999.

For C2, the population is made up of all commercial banks, savings banks, mortgage companies, and finance companies under the jurisdiction of the Financial Supervisory Authority of Norway, state lending institutions and Norges Bank, restricted in accordance with the standards of the National Accounts, together with insurance companies and private and municipal pension funds. With reference to the Standard Industrial Classification, this includes the industries 65.11, 65.12, 65.22 and 66. The Norwegian Public Service Pension Fund, which is included in industry 75.30, also reports data for these statistics.

As discussed, C3 is comprised of the sum of C2 and the public’s external loan debt. The external part of C3 comprises monthly external debt statistics for the main institutional sectors Local Government, Private Non-Financial Enterprises, Public Non-Financial Enterprises and Households (Quasi-corporated private enterprises etc.) The debt figures comprise external long-term debt such as bond loans, loans from credit institutions, loans from companies within the same group of companies, subordinated loans and short-term debt such as certificates, overdraft facilities, short-term debt to companies within the same group of companies, owners, employees etc. Foreign shareholders in Norwegian companies are not included.

The calculations of revaluations due to exchange rate fluctuations are based on stock data for the public’s gross debt to the credit sources in the C2 statistics, official data for exchange rates and data for the composition of currencies of the bank’s receivables and debts from the quarterly BIS survey.

The data on the external loan debt are based on the Balance of Payments Statistics. A new system for collecting and producing data for the balance of payments was established in 2005 after the Norges Bank Foreign Exchange Statistics were discontinued. The most significant change in the data collection process is that Statistics Norway has established new sampling surveys for non-financial and private quasi-corporated public enterprises. The shareholdings of foreign shareholders in Norwegian enterprises, as mentioned above, and &“other liabilities´´ are not included in the public’s external debt. This is in accordance with the definitions of C1 and C2, neither of which including these financial objects.

Data from the Balance of Payments reporting is used for the external loan debt of non-financial enterprises and quasi-corporated private enterprises. This survey is linked to the Standard Industrial Form (SIF) from the Directorate of Taxes, and data for trade in services, financial incomes and costs, foreign assets and liabilities etc. are collected quarterly and annually for use in the Balance of Payments survey. The data for the public's external loan debt are collected on a monthly basis. Information on securities from the Norwegian Central Securities Depository is also used and depot information for financial enterprises is collected by Norges Bank.

The C2 statistics are, in principle, based on total censuses.

For the external part of C3, administrative registers are used to collect data on securities from the Norwegian Central Securities Depository and depot information on financial enterprises. For the non-financial companies and quasi-corporated private companies, these data are either submitted via Altinn (the central government authorities' common Internet reporting portal) or by e-mail.

The editing of the financial institutions’ accounting statements are undertaken by Statistics Norway and the Financial Supervisory Authority of Norway. The data from the Norwegian Public Service Pension Fund and VPS are controlled by Statistics Norway.

Manual controls are undertaken when the data on the public’s external loan debt are received, and the database contains control routines for content and logical coherence.

The editing policy is to disseminate changes of the previous month’s data together with the current month’s data. Statistics Norway is fully prepared to edit in a timely manner, with appropriate notification to users and the media, should it be deemed necessary by the magnitude of a past error, or, owing to other exceptional circumstances. Some of the reported data may contain preliminary data that are subsequently corrected.

All growth rate calculations based on holdings that include foreign currency loans are adjusted for exchange rate fluctuations in order to eliminate all changes not related to transactions. The growth rate calculations are also adjusted for statistical breaks that are not attributable to transactions or valuation changes. An example of this kind of break could be that a financial enterprise moves from one sector to another. Another example is that inter-company loans are not updated as of January 2000.

Up to the end of 2004, the transaction figures for calculating "Credit from foreign sources" were obtained from the balance of payments, while Statistics Norway’s “Foreign assets and liabilities" was the source for the volume figures. In the new system as from January 2005, the calculation of the development of the foreign component of C3 is based on monthly data for loan debt and revaluation from a sample of non-financial companies and quasi-corporated private companies, together with projections of the external loan debt of municipalities and households. The transactions in a period are calculated as the change in the loan debt during the period minus the revaluations and any &“statistical breaks´´ during the period.

The debt data will not be published if a cell in a table is based on less than three reporting units, and this implies a risk of identification, i.e. that the figure can be traced back to the reporting unit. Exceptions here are Norges Bank and the Norwegian Public Service Pension Fund, who do not object to such identification.

The revision of international standards and major changes in accountancy laws may result in a gap in the time series data. A change of sectors may have the same result, for instance if a financial enterprise moves from one sector to another. We try as far as possible to make adjustments for statistical breaks in our calculations of transactions (break corrections).

The external loan debt statistics in their present form were collected by Statistics Norway in March 2005 (figures for January 2005).

For the non-financial enterprises, the monthly and quarterly surveys on external loan debt are based on a sample of companies. Furthermore, for these companies the surveys comprise parts of the companies' balance sheet according to the SIF, i.e. the items that provide information on the foreign debt. The interpretation of what constitutes a liability between a Norwegian company and a foreign counterpart, and how the debt should be distributed into the various debt items can lead to errors in the statistics.

The response rate for the C2 statistics is 100 per cent.

The response rate for the external loan debt usually amounts to 96-97 per cent for the part of the survey covering the non-financial enterprises. Hence, the non-response figure is relatively low. There are, however, some non-response errors with regard to some of the debt items in the forms. This is corrected through contact with the respondents and estimation of data for some units in the sample in such a manner that the published data probably do not contain any notable errors with regard to the total level of debt or distributed by debt objects.

The sampling error for the external loan debt is the uncertainty caused by producing figures a selection of entities and not the total population. Hence, the sampling error measures the expected deviation between the result from using the sample and the expected result from running a total census for the entire population of companies with foreign assets and liabilities.

The sampling methods presuppose that the population itself covers the vast majority of all companies with foreign assets and liabilities. There is, however, no overview of companies with these balance sheet items, and hence it may be difficult to detect all relevant units that should be included in the quarterly surveys. The collection procedures are, however, modeled in such a way that it is unlikely that important units are not included.

There may be errors or flaws in the reporting for the external loan debt statistics. The most common errors and flaws are numbers stated in items where they should not be included according to the items' definitions, and partly that the distinction between a Norwegian and a foreign unit can be unclear or that the reporting parties do not state all relevant information in their submitted data.

The statistics show preliminary figures. Data may be revised in future publications. 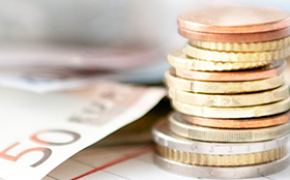 The twelve-month growth in total gross debt (C3) was 2.2 per cent to end-May 2017, up from 1.8 per cent the previous month. The increase stemmed from both domestic and foreign debt sources.